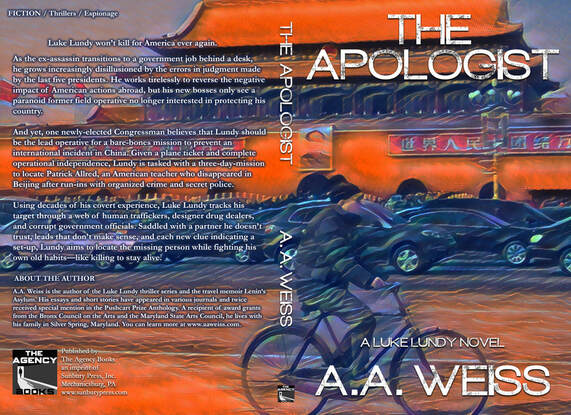 Available for purchase now: Amazon / IndieBound / Bookshop.org / Sunbury Press
What people are saying:
​
"A taut non-linear thriller with satisfying twists and an array of complex characters...engages the reader from the first chapter to the last and absolutely nails the structure."

As the ex-assassin transitions to a government job behind a desk, he grows increasingly disillusioned by the errors in judgment made by the last five presidents. He works tirelessly to reverse the negative impact of American actions abroad, but his new bosses only see a paranoid former field operative no longer interested in protecting his country.

And yet, one newly-elected Congressman believes that Lundy should be the lead operative for a bare-bones mission to prevent an international incident in China. Given a plane ticket and complete operational independence, Lundy is tasked with a three-day-mission to locate Patrick Allred, an American teacher who disappeared in Beijing after run-ins with organized crime and secret police.
​
Using decades of his covert experience, Luke Lundy tracks his target through a web of human traffickers, designer drug dealers, and corrupt government officials. Saddled with a partner he doesn’t trust, leads that don’t make sense, and each new clue indicating a set-up, Lundy aims to locate the missing person while fighting his own old habits—like killing to stay alive.